>> THE FAKE COINS OF INDIA

To cheat gullible coin collectors of both India and abroad some unscrupulous persons are in the habit of producing fake coins and advertising about those in various websites,demanding huge amount for each coin. Actually these coins are never minted by any of the Indian mints for circulation. The purpose of this article is to aware my fellow coin collector friends about those fakes, so that they may not be fooled by those idiotic advertisement.


As I am not in possession of any of the fakes, all the pictures presented are collected from internet and I apologize for using those without  the prior permission of the advertisers.


Mahatma Gandhi, the Father of the nation, was born in 1869 A.D. He led the movement for ’s freedom from British Rule and got her freedom on . He was assassinated on . observed his birth centenary in the year 1969. To mark this celebration some commemorative coins and Bank notes were issued. A 10 rupees coin was issued in silver alloy on this occasion.


The Original coin issued:
This coin was issued with the metallic composition - Silver Alloy ( Silver-80%+Cupper-20%) 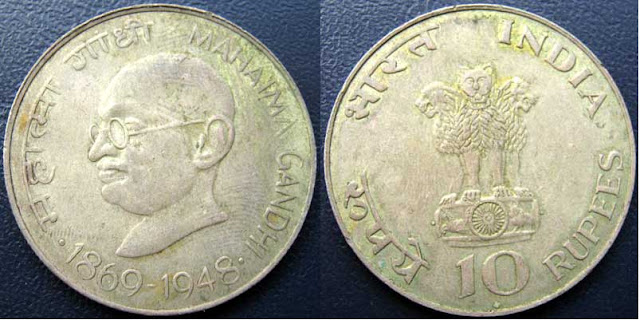 The Fake Issue:
Though no Indian mint issued this coin in copper – Nickel alloy, this fake coin was advertised for sale in a leading web site in Auction format with the caption, “10 Rupees 1869-1948 Copeer+ Nickl Coin Most Rare Very Very Rare” with a starting bid of Rs. 9,870.00. This seller was a new seller with feed back score (0). 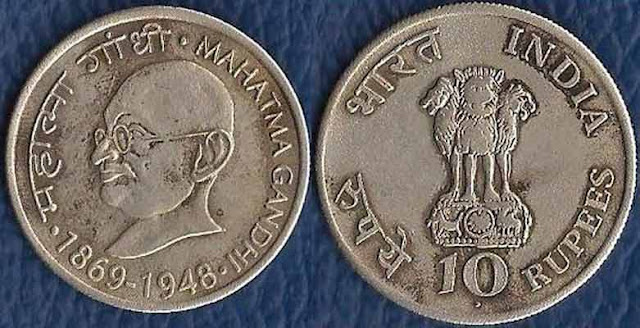 
Pandit Jawaharlal Nehru was the first Prime minister of from to . After his sad death on , to pay homage to the departed leader, a 50 paise coin was issued on in his commemoration. 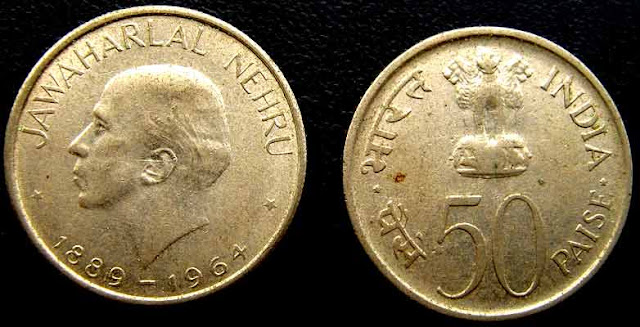 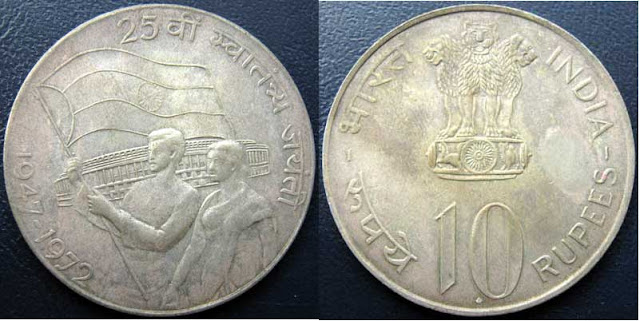 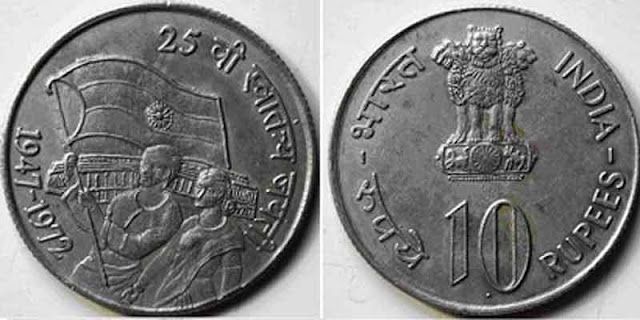 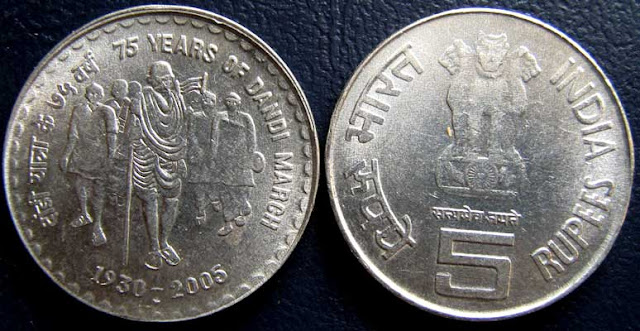 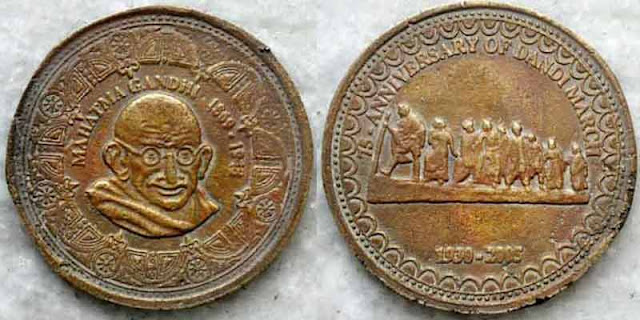 This fantasy coin, was minted with portrait of Ganhiji on one side and replica of ‘Dandi Yatra’ sculpture on the other side. Neither the name of the country of issue nor the value, is shown on this token. This token was placed for auction, in a leading website, and sold for Rs. 250/-. Such coin was never issued by any of the Indian mints. 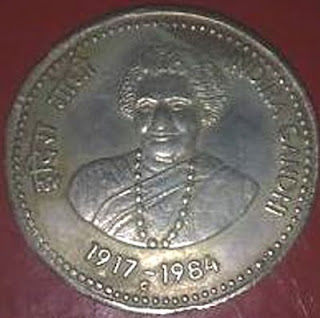 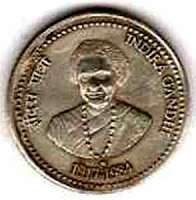 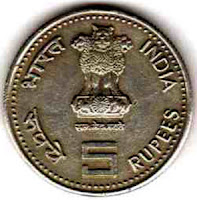 Recently this fake 5 rupees coin is advertised in a leading website for sale.

Recently I found this fake coin,  advertised in a leading website for sale.


This fake coin was  advertised in a leading website for sale.

In 1990, India issued a 1 rupee coin to commemorate the birth centenary of Dr. B.R.Ambedkar, the chief artitect in framing the Constitution of India.

Dr. B.R.Ambedkar, 2 rupee fake coin. His effigy appears to be same as that on the 1 rupee original coin. This coin appears to be a MULE coin with Ambedkar obv and National Integration rev.

Dr. B.R.Ambedkar, 2 rupee fake coin. His effigy doesn’t appear to be same as that on the 1 rupee coin.

Fisheries, Issue
A 50 paisa coin was issued for general circulation in 1986 on the 6th World Food Day.
The Original coins issued:

To emphasize the need of Population Control, a 2 rupees coin was issued in the year 1993,with the legend “SMALLFAMILY HAPPY FAMILY”.

In 1997, India issued a 2 rupee coin to commemorate the birth centenary of Netaji Subhas Chandra Bose, a great patriot. Though the Kolkata mint wrongly issued this coin in 1996, no 1 rupee coin was issued by any mint.

In 1999, India issued a 2 rupee coin to commemorate CHHATRAPATI SHIVAJI, a hero and a great King . Though this coin was minted from all 4 mints , no 1 rupee coin was issued by any mint.

On the occasion of the 25th Anniversary of the Food and Agriculture
Organization of the United Nations, in 1970, India issued, two coins in the denomination of 20 paisa and 10 rupees, for general circulation. Again India reissued the same two coins in the year 1971, but this time only as Proof or uncirculated specimens.

The Original 20 paisa coins (issue of 1970 for general circulation)

No mint in India issued such coins in 1972. Mark the poor quality of this
coin.
Another Sun and Lotus fake coin: 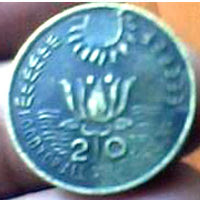 No mint in India issued such coins. 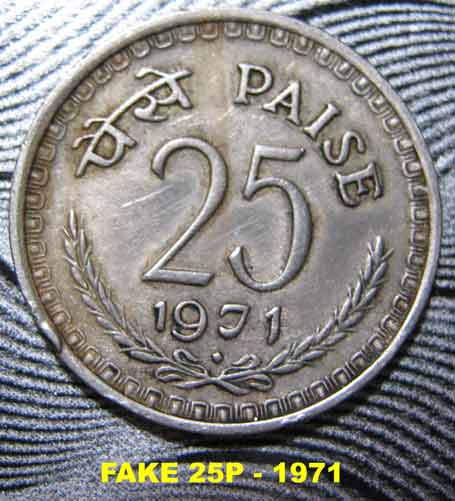 Please mark the differences between the first ‘1’ and the last ‘1’ in the date of this coin. Those two ‘1’s are quite different, telling the story of this forgery.

Note: Many thanks to Mr. Deepak Mody of , for giving this coin from his collection for my study.

50 paisa Ferrite Stainless Steel coins were issued in India in1988. Its obverse had map of India with the Parliament house in front and its reverse
had lion capital and denomination.

Again 25 paisa Ferrite Stainless Steel coins were issued in India in1988. Its obverse had an one horned Indian Rhinocerous and its reverse had lion capital and denomination

Mark these 3 fake coins. These show rhinoceros picture on one side and
50 paise denomination on the other side.


A 5 Rupees fake coin:
5 rupees regular coins were issued in Copper Nickel  from 1992 to 2004. Please see the picture of an original coin issued from Indian Mints. 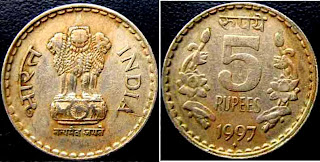 The photo of the coin shown below is a fake coin. It was collected by me from circulation. 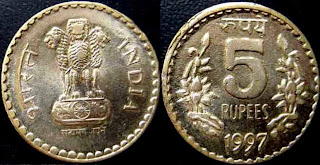 Mark the differences between the original coin and the fake coin. The Ashokan capitols on the obverse side and the floral design on the reverse side are completely different. See also the photo of the edge of this fake coin. 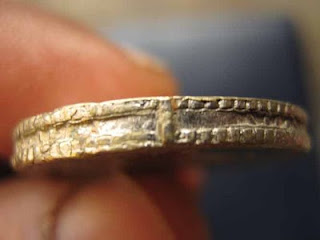 Two lines are found on the edge of the fake 5 rs coin shown. These two lines are at the two opposite ends on the border. This indicates that it may be a cast coin.

To commemorate the Bicentennial Year of the State Bank Of issued a 5 rupees coin in 2006, for general circulation. This coin was issued in Ferrite Stainless Steel. Please see the picture of the original coin issued from Indian Mints. 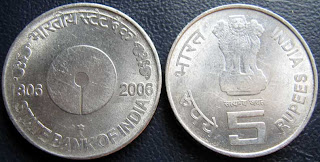 The photo of the coin shown below is a fake coin.

Please compare this fake coin with the original coin shown above. This fake coin is made most probably from mild steel and a nickel coating has been applied all over it. Mark the poor quality of finish of this fake coin and also the rust deposited on its surface.

Note:  This coin was collected by my friend Mr. Piyush Chandra of from circulation, who presented this for my collection.

Another Fake 5 Rupees IT coin in Brass:

The Original coin issued:
This coin was minted in FSS. 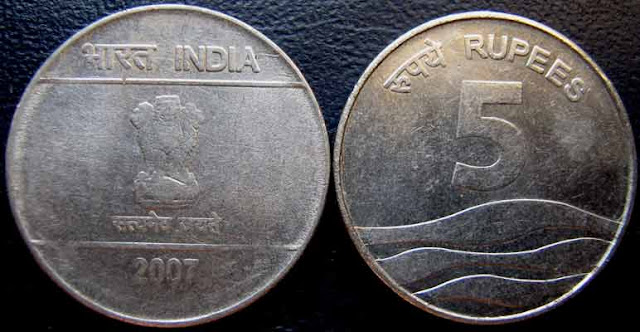 The Fake Issue:
This fake coin was minted in Brass Alloy.

This fake was collected by my friend Goldy Goyal from circulation. Many thanks to him for sending the coin photo to be posted on this page. 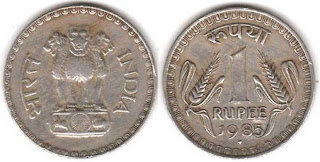 cupro-nickel coin of 1979 of Mumbai mint is used. The last digit '9' of 1979 is tooled, so that it appears to be a zero. But this zero is smaller in size and appears towards the top of the line.

All Bi-metal coins minted by Indian mints have a central circular piece of cupro-nickel alloy and an outer ring of Al-bronze alloy. Some notorious people have separated both the pieces by some mechanical process and sell both the separated pieces as error coins. The photos of such separated pieces are shown below.

This coin was collected by my friend Goyal Goldy of Punjab. He was kind enough to send me photo of this fake coin to be placed in this blog.


In the year 1950, after became a Republic, some coins were issued, showing Indian themes, popularly called as Anna series coins. At that time: 1 Rupee = 16 Annas, 1 Anna = 4 pice. Hence 1 Rupee = 64 pice. The 1 Pice coin showing  the picture of a Running Horse was issued from Indian mints in the years 1950 to1955. From 1957 the Anna series coins were discontinued and issued decimal coins, in which 1 Rupee = 100 Naye Paise.

Acknowledgement: Thanks to Mr. Tejas Shah , Mumbai for providing photo of this fake coin.

A Fake Quarter Rupee:
No such coin was ever issued in .

The story of their success may be like this. They may have kept these home made fraud coins in a pile of original coins and went to purchase some article from a shop, owned by an aged shopkeeper with a poor vision. They might have chosen the evening hours, as there would low visibility in a rural shop where the shopkeeper uses a kerosene lamp for lighting purposes and the shops would have been crowded at that time. After their purchase was over and the cash was handed over and the shop keeper counted and kept the cash in his cash box, their mission of cheating would have been successful.

A 5 Naye paise Cupro-Nickel coin changed to the shape of a 25 paise coin: 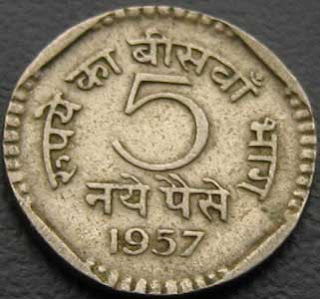 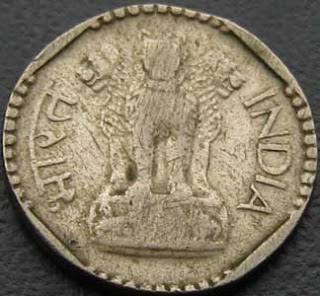 
A 10 paise Aluminum coin changed to the shape of a 50 paise Cupro-Nickel coin: 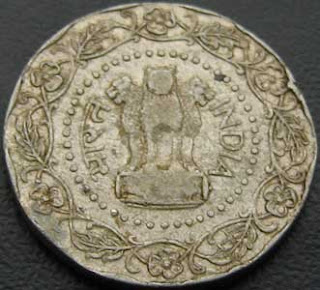 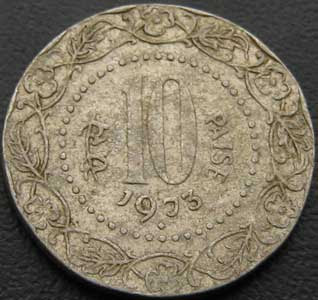 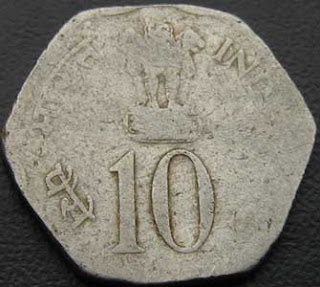 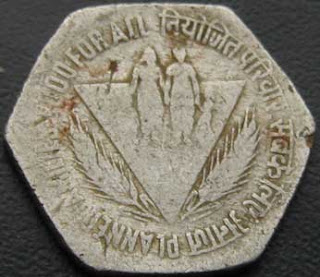 Resulted in a gain of 10 paisa


A Half Anna George VI Cupro Nickel Coin Changed to the shape of a George VI Quarter Rupee coin:

Resulted in a gain of 3.5 Annas.(Approximately 20 paisa)

A recent incident:
I have also heard that a few days back, some children have joined two steel 50 paisa coins with some gum and handed over the same to a shopkeeper as a 5 rupee steel coin and purchased chocolates from him. But sorry, I was unable to collect the specimen, hence unable to show any photographs.

I have this coin in my collection from my school days (1960-64. The obverse and the reverse of this coin is identical to George VI, Half Rupee Nickel Coin, of 1947. The last digit of the year of manufacture is faded. Its reverse side shows a diamond mint mark indicating that it was from  mint. The worn-out condition of the coin indicates its wide circulation and use. The edge of this coin appears to be milled. But this coin is of BRASS alloy. But I am unable to find out about this in any coin .catalog

Hence I am in doubt whether this coin was a genuine issue or Off metal strike or a forged one.

Can any coin collector friend help me in clarifying my doubts?