>> THE QUICKEST CIRCULATING COIN OF INDIA


The 5 Rupees. “Connectivity and IT” coin: 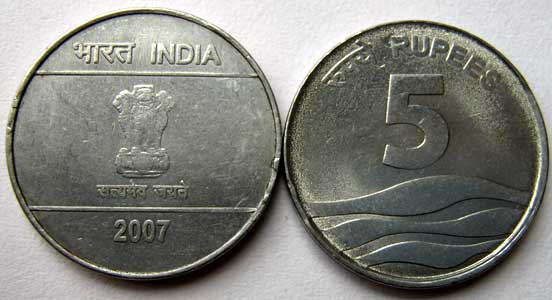 Details about this coin:
Metal: Ferritic Stainless Steel ( Iron - 83% + Chromium - 17%)
Weight: 6 gms
Diameter: 23 mm
Obverse: The face of the coin is divided into three portions with two horizontal lines. The center portion bears the "Lion Capitol" of Ashoka Pillar with the legend "Satyameva Jayate" inscribed below. The top portion contains word "Bharat" in Hindi and "INDIA" in English and bottom portion contains the Year of issue in International Numerals.
Reverse: The lower periphery of this face of the coin contains the two visual metaphors which depicts the smooth fluid mass representing the ceaseless flow of data/information in the ether. In the center, Denominational Value "5" in International Numerals and in upper periphery the word “Rupaye" in Hindi and the word "Rupees" in English.
Shape: Circular
Edge: Security 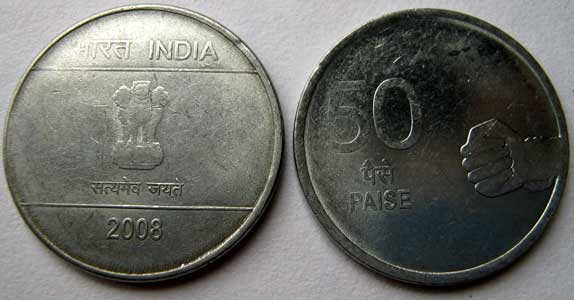 Reaction of the public towards this 5 rupee coin:
As both the coins are identical to each other in many respects, it becomes difficult for general public to differentiate between these two coins at the time of transaction. As a result, most of the public (almost 99 out of 100) have wrongly given this 5 rupee coin as a 50 paise coin to other persons, hence incurring a financial loss. Hence almost every person dislikes either to handle this 5 rupee coin or to keep this coin with them, due to the fear of incurring financial loss at some time. So almost every person (not the coin collectors) tries to get rid of this idiotic 5 rupee coin at the earliest opportunity. Hence this 5 rupees coin is the quickest circulating coin of India.

** Source: RBI circulars, and 19th and 20th century coins of India by Hobby Publications and other literatures
Posted by beekar at 9:46 AM 3 comments